Evergrande’s “Marketized Default” and the Consequences 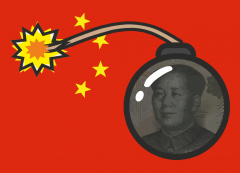 (From the third regular issue of The National Investor for September, 2021)

Investors just as much as politicians too often get caught up in often-stale, simplistic narratives on a subject--in this case, on a country, China--which prevents them for seeing and understanding FACTS underneath the scripted rhetoric.

The world will soon be learning that lesson in what Chinese authorities themselves have termed the "marketized default" now underway of Evergrande, the most indebted single real estate developer in the world.

Some, for example, still insist on always describing China as a "communist" country.

The fact is that China put itself, its economy and its social structure in this mess by outdoing anything that came before in America's reckless subprime mortgage and real estate bubbles that blew up in 2007-2008.

AND China tacitly allowed a level of greed, obscene profits and hubris to exist for years that outdid anything America's former energy company-turned-hedge fund, Enron, ever did.

Now the chickens are coming home to roost; but as I pointed out in the cover story of the latest issue, the way in which Evergrande's default(s) will manifest themselves is again a subject on which the average investor has scant real information...but many pre-conceived notions.

Noteworthy--but little-covered--as this financial crisis unfolds for China is that it comes at a time when President Xi Jinping has determined to begin weaning his country from the "western" system that has enabled its rise. A modern-day emperor now in all but name, Xi's undoing of the mistake (Evergrande and similar firms throughout China's debt-choked economy and banking system) he tolerated for too long will carry consequences FAR beyond the apparent market and contagion risks.

I speak to a lot of this in the below excerpt, which you can read/print/download below. And of course, I'll be keeping our Members apprised of how me must navigate this change on the "global order" as well as it unfolds.

As always, if you have questions/comments e-mail me at chris@nationalinvestor.com

Login to this site requires ssl communication.
Click here to reload the page over ssl.

What Makes The National Investor Tick?

A Guide to stock picking that EVERYONE can enjoy!

I am a new subscriber to your publication and I am very impressed with your performance and recommendations. I value your advice and respect your opinion...